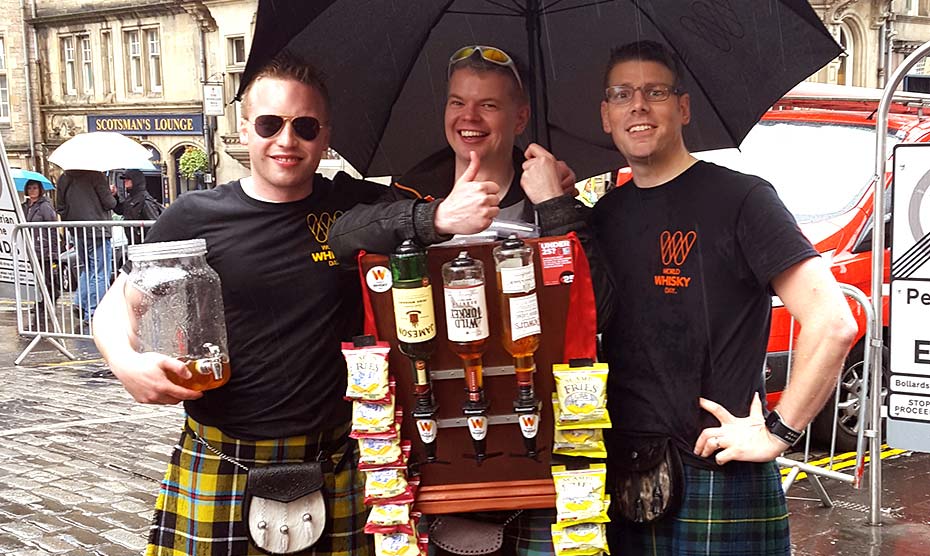 This year’s World Whisky Day celebration was the biggest ever with more events taking place in more countries, with more attendees, than ever before.

In its sixth year, our global whisky party was celebrated with countless drams at more than 300 registered events attended by more than 25,000 people in 47 different countries.

Festivities circled the globe, starting 12 hours ahead of UK time with parties on Tonga and Kiribati and ending more than 40 hours later on Tahiti. Throughout the day, whisky lovers raised a dram at a huge variety of events ranging from a prohibition-themed festival at Whisky Day Cracow in Poland to the debut of new casks by the Scotch Malt Whisky Society in Seattle and from a tour of Hungary’s only dedicated whisky distillery to a battle of independent whiskies in Singapore.

In Edinburgh the WWD HQ party was at street food market, The Pitt, but our very own human bar was serving drams and cocktails at the top of Arthur’s Seat and across the city centre too.

Throughout the day #WorldWhiskyDay was trending in the UK battling for top spot with the wedding of socialite Pippa Middleton. The hashtag was used thousands of times on Twitter and Instagram – reaching tens of millions of timelines.

World famous whisky lovers got in on the act too. Outlander stars Sam Heughan and Caitriona Balfe marked the day by playing the classic drinking game ‘Never have I ever’ with whisky while on Entertainment Tonight, while comedian and Parks and Recreations actor Nick Offerman starred in a series of whisky-themed videos. Stars from a diverse range of fields played their part – from the Indian actor and model Karan Tracker to the Irish WWE wrestler Sheamus. For the best of the on-line activity see our roundup.

World Whisky Day is organised by drinks magazine Hot Rum Cow. Publisher Fraser Allen said: “This truly global celebration of all things whisky just keeps going from strength to strength. There’s such a huge variety of world whiskies and so many different ways to enjoy the spirit but it’s great to see so many people around the world united in their enjoyment of one of life’s simple pleasures on a day like today.”

This year the focus was on encouraging new people to give whisky a try with whisky fans sharing their whisky stories and recommending great introductory drams and serves to whisky newcomers.

World Whisky Day 2017 made headlines across the world with coverage by scores of print, digital and broadcast outlets. Many took the opportunity to educate their readers and viewers about whisky. NDTV in India offered seven tips you must remember to order whisky like a pro and The India Times 11 crazy facts about whisky, while The Times of India mused on what type of whisky would reflect the character of the city of Gurgaon.

The Sun, Outlander Russia and Socialite Life all focused on Outlander star Sam Heughan and at the luxury end of the market Tatler shared their six best whisky shops, GQ waxed lyrical on London’s most incredible whisky bar and Country and Town House gave us their guide to whisky.

Meanwhile Bloomberg showed us how to start a whisky collection on a budget and Metro newspaper in the UK explained the difference between whisky and whiskey. Filipino news outlet ABS-CBN recommended 10 bottles to drink on the day, Men’s Health in Holland offered four of the best while Men’s Fitness offered seven whiskey cocktails. But Nigerian Entertainment Today just offered 10 good reasons to drink the stuff.