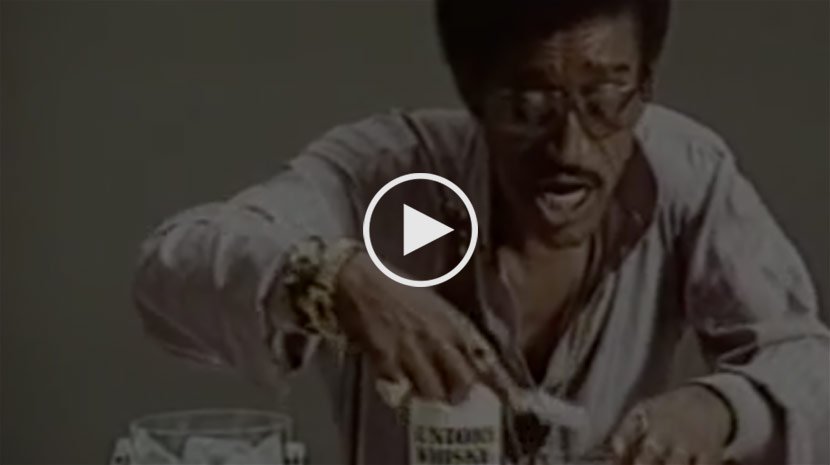 Whisky might have close associations with luxury, exclusivity and quality, but don’t believe its rap sheet is without blemish, as these seven commercials show.

From frozen peas and children’s board games to compact cameras and the finest Champagne, film director Orson Welles was willing to promote almost anything during the 70s. His commercial efforts have since become legendary, not least because of his tendency to perform like he’s been enjoying the product a little too much, as this pseudo-philosophical offering for Nikka G&G demonstrates.

Slated as arguably the worst commercial of its kind ever aired, this effort from Spey Whisky featuring ex-England captain Michael Owen, really is a genuine howler. Ready yourself for a positively palpable demonstration of passion for thoroughbred horse racing and Scotch whisky.

Coast’s Neil Oliver meets Dior Homme. Sharon Stone has the tables turned on her by a true Scotsman in this commercial for William Lawson’s blended Scotch whisky.

Some whisky companies cut straight to the chase when it comes to marketing their product, and Red Bowler’s no exception. This one’s a consciously refreshing stab at a traditional advertising formula with all the subtlety of, well, an especially rude and ruddy Scotsman who, at the end of the day, just wants his whisky.

The original James Bond has traded a life in the fast lane for one of solitary beach walks, a Doberman Pinscher, loud shirts and creative writing in this commercial for Suntory Crest. The Bond elements are still present, albeit somewhat lost in translation.

A lesson in scat singing, pouring whisky and why drugs are bad from Rat Pack member and all-round entertainer, Sammy Davis Jr.

Emails welcome from those who are able to shed any light whatsoever on just what is going on in this Suntory commercial. A podgy feline, a short-skirted temptress, one of Keanu Reeves’ worst ever hair days and a similarly dire soundtrack make for a thoroughly entertaining, albeit impossibly cryptic, whisky commercial from the apparent masters of the genre.