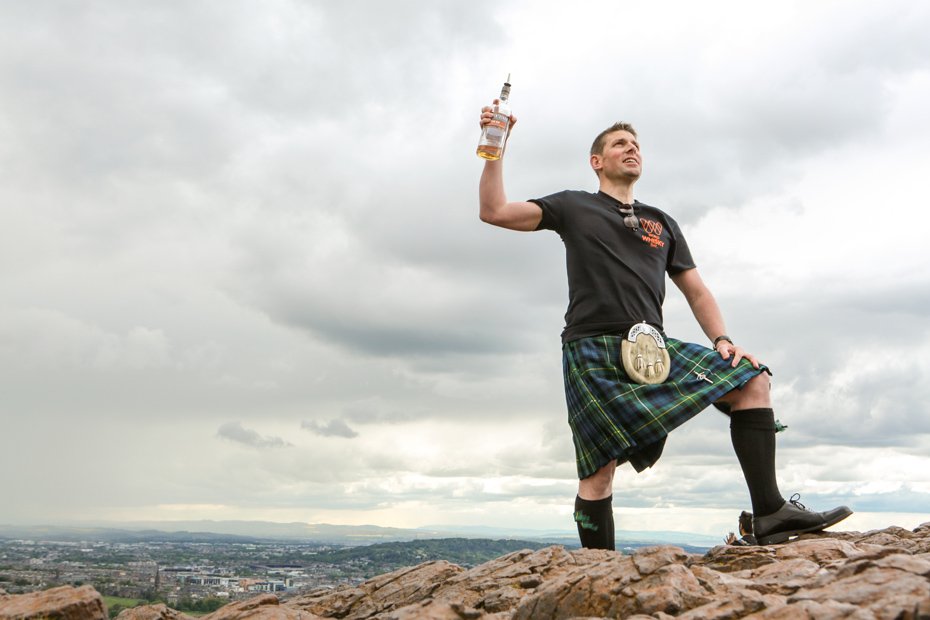 Believed by some to be named in honour of the legendary British king, the iconic hill that is Arthur’s Seat in Edinburgh was the scene of considerable revelry on World Whisky Day this year – the kind the once and future king himself would no doubt have endorsed.

Armed with bottles of Auchentoshan American Oak single malt Scotch whisky and a table (alas, not round), and accompanied by a BBC film crew, the World Whisky Day team set out to summit the extinct volcano just after midday. The weather forecast didn’t bode well, but it hadn’t dampened the spirits of the dozens of climbers already heading for the top.

The team was drawing attention; one member was kilted, another carried the table, another wielded the bottles of whisky, and another a camera. The film crew came up the rear. Whispered mentions of the liquid gold in stow began spreading around the hillsides.

Only on summiting was the threat of rain fully realised; black clouds were growing over the Pentlands to the west and a strong wind was picking up. Work had to be quick. The table was laid, a cloth placed over it and the cameras set rolling. By now, scores of climbers were gathering at the summit around the team. And at the cue of the clapboard the whisky was uncorked.

Never before had Arthur’s Seat played host to a more merry multinational gathering. Spaniards, Indians, Frenchmen and Frenchwomen, Scotsmen and Scotswomen, Germans, Americans – the hill was strewn with people from the four corners of the world, united in a celebration of the water of life. From little plastic cups they sampled the treasure and toasted the world. Tweeters were tweeting, Snapchatters were chatting, and hashtaggers were tagging.

Soon after, the skies opened up with biblical force. The wind howled, the rain cut horizontally and the ground underfoot became saturated. The team, along with the majority of the climbers at the summit, made for cover down the hillsides. The going was tough, clothes were soaked and socks could be wrung – but spirits were far from damp. And as the foot of the hill was reached the sun broke through the clouds, and all was calm again.

For some this event had been a welcome introduction to whisky, for others a dram with all the familiarity of a warming embrace, but for everyone an occasion to be remembered for the rest of their lives.