We reveal the winning cocktail in the Powers Whiskey competition

Five skilled bartenders were shortlistedto craft a winning cocktail. Each entry was judged on originality, presentation and, of course, taste. Ultimately, Luke Prosser, bartender at The Spaniard, wowed the judges with his ‘Nospresso Martini’. Combining Powers Gold Labelwith sweet vermouth and a homemade chocolate liqueur, the cocktail scored highly for creativity.

We spoke to Luke about the inspiration behind his cocktail and his love of Powers whiskey. 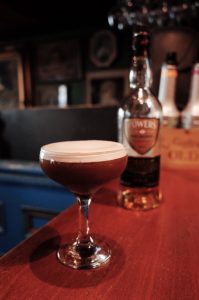 Q: So Luke, tell us what first got you into bartending?

A: I’ve only been working in bars for two years, though I’ve been in hospitality since I was 15, working with my mum for a small part of that time. I began bartending not long after doing the European Bartender School (EBS) bartending course. After I left school, I decided to study something I was interested in, so I chose to go to EBS Madrid.

During this course, I discovered my passion for anything tasty. Within four weeks, I went from drinking vodka and Red Bull to neat whisky, Old Fashioneds and Irish coffees. Now, the highlight of my job is convincing people to try something new. By far, the best part of being a bartender is when I hand a customer a drink they weren’t sure about and then completely change their perspective on drinking culture.

Q: Where do you currently mix drinks?

A: I work in The Spaniard Bar, a small, well-known bar in the centre of Belfast specialising in rum. We do however have a great selection of Irish whiskey, gin, tequila and mezcal for those who know what they like. Our cocktail menu is simple, featuring a range of classics and one we created ourselves.

Working there is a dream – the customers are always good craic, the cocktails are easy to make and taste fantastic, and you can have a burger from the nearby Pablos delivered right to you through the bar.

Q: The Nospresso Martini is a feat of cocktail engineering – what was your inspiration behind it?

A: I came up with the cocktail after messing around with clarified milk punch, the rum port punch from Jerry Thomas’ Bartenders Guide. It was the first punch I ever made and it blew my mind how much clarification could change a mixed drink. A few weeks after I had made the punch, I was talking to a friend and consommé came up in conversation (consommé being a clarified stock used in cooking) and I thought it would be great to integrate it into a cocktail.

Initially, I was making the cocktail as part of a different event that pitted baristas and bartenders against each other. As part of the competition, bartenders were tasked with creating a cocktail with coffee. As we don’t have a coffee machine in the bar at work, I decided to challenge myself and try to make the drink taste like coffee without using any coffee or coffee-flavoured ingredients.

Q: What makes Powers your whisky of choice?

A: To me, Powers is one of the few Irish whiskeys available that doesn’t smell and taste like most other generic Irish whiskeys. Its sweet honey taste gives it a great complex sweetness, unlike that of most Irish whiskeys. The spicy notes give it a similar taste to that of a rye whiskey. Overall, I’d say the reason I love Powers is for its diversity of use in the bar. From using it in an Old Fashioned to drinking it neat or enjoying it in an Irish coffee, Powers will always be my go-to Irish whiskey.

Below is the recipe for the Nospresso Martini. Warning: it’s not for the faint-hearted but it’s well worth the effort!

Shake for 10 seconds and fine strain into your favourite stemmed glass – or a rocks glass over ice, if you’d prefer.