The science of whisky-making can be ‘distilled’ down (sorry) to five simple stages: Grain > Beer > Spirit > Cask > Bottle. However, as we all know, nothing is as simple as it sounds. Each of these stages has its own particular processes and rules from the type and treatment of the grain used in the base beer to the precise skill of the distiller and master blender in creating the perfect flavour profile. Every type of whisky from single malt scotch to a smooth Japanese blend also has its own set of scientific processes – these give us the vast array of whiskies available around the world today.

The basic ingredients in every whisky are grain, water, and yeast. While most whisky will use a blend of different grains (rye, corn, wheat and barley), single malt whisky can only be made with malted barley. While Scotland is famed for its single malt Scotch, it’s not the only country producing great single malts – American Single Malt Whiskey is an exciting, emerging category and Japan has many acclaimed single malts, too.

So what does ‘malted’ even mean? The process of malting releases an enzyme to convert the starch present in the barley to sugars. This is done through germination – moistening the barley to allow it to partially sprout (or germinate) before stopping the process by drying the barley using a heat source. Those who like their whisky peaty will likely know that the traditional smoky flavour of some Scotch – like the much-loved Laphroaig – comes from the peat used to fire the kilns which dry the barley during the malting process. Phenolic compounds, known as ‘phenols’ transfer from the peat giving the malt, and so the whisky, its signature flavour. The greater the amount of peat used, the more peaty and smoky the whisky.

Whatever the selection of grains is in your preferred whisky, the next, rather violent-sounding step happens to all of them. Mashing is when the grains are ‘agitated’ to extract the sugars before fermentation. In practical terms, this simply means the grain goes into a ‘mash tun’ where it is mixed with water. The resulting porridge-like mush (known as mash or wort) then goes on to fermentation.

Did you know that whisky starts life as beer? It is the liquid gold that emerges from the distillation of base beer, known as wash. And how do we get this beer? Adding that third, all-important ingredient – yeast, of course! Generally, the mash will spend 48-96 hours fermenting in a huge vat called a washback – switching up the yeast strains and duration of fermentation creates different flavours. While there is great skill and care taken in the creation of this liquid which determines the ultimate flavour profile of the whisky, we wouldn’t recommend drinking it at this stage. However distillery workers were once known to filter the yeast out to create a beer-drink they called ‘Joe’. In fairness, it was thirsty work! 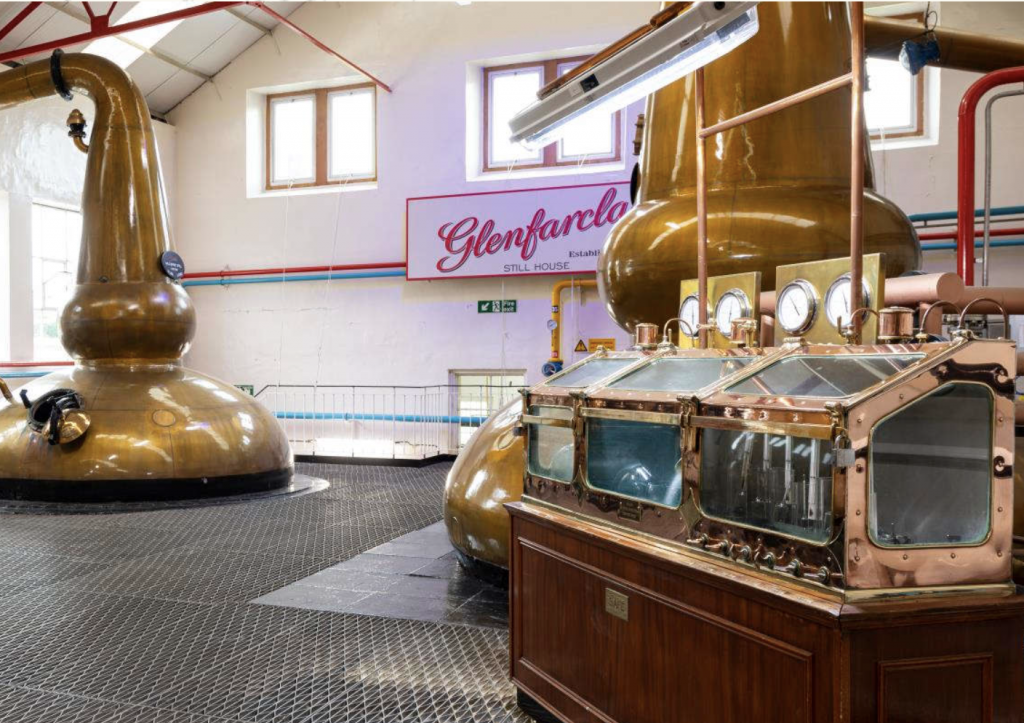 The process of distillation increases the alcohol content of the base beer or ‘wash’ to make a spirit. Distillation happens inside a still – the shape of this still and the number of times the liquid is distilled depends on the type of whisky being made. Scotch malt is usually double-distilled in a pot still (other malts may be triple distilled in a pot still), while the distillation of bourbon or grain whiskies usually happens inside a column still. Whichever shape is chosen, the still tends to be made of copper as this metal helps to strip out unwanted flavour and aroma compounds from the liquid.

During the distillation process, the distiller must make cuts between the desirable and undesirable parts of the distillate. In America, this is usually done by taste and smell but in Scotland, distillers use a ‘Spirit Safe’ – a glass and metal box which acts like a ‘mission control’ of flavour.

In the early days of whisky, it would have been drunk straight from the still, at around 70% alcohol. It was only discovered in the 16th century that storing the spirit in oak casks allowed the flavour to mature, evolve and mellow into something far more sophisticated and complex.

A variety of oak casks can be used depending on the type of whisky (or indeed whiskey) being made. Second-hand casks are preferred to new casks when it comes to storing and maturing Scotch whisky. This is a lot to do with the ‘vanillin’ in the oak (the same compound found in vanilla pods). In new barrels, this flavour is very strong so second-hand casks are chosen to impart a more mellow flavour. However when it comes to bourbon, that caramel, vanilla flavour is exactly what you’re after so the spirit is always matured in virgin oak casks (which may later go on to store Scotch).

Other casks can also be used to ‘finish’ the whisky such as Port or Sherry casks. You can find out more here but let’s move onto the magic happening within a whisky cask as the clear, distilled spirit is transformed into that precious amber nectar.

Truth be told, we’re not entirely sure of everything that happens – no one is. Is it magic or science? A little bit of both, we like to think. But here are a few things that do occur:

The spirit extracts tannins, oak lactones, clove and vanilla aromas from the wood creating a unique colour and flavour.

The burnt interior of the cask acts like an activated charcoal absorbent, removing sulphur and other undesirables.

– A breath of fresh air

Gaps in the wood allow the liquid to absorb oxygen causing the spirit to become fruitier, more floral, balanced and mature.

Evaporation begins to occur due to the wood expanding and contracting with the seasons, this leads to a decline in alcohol strength and volume. The part of the maturing whisky that vanishes is called the angel’s share. Scottish distillers are allowed to write off 2% of their production volume each year to the angel’s share, which is much less than distilleries in warmer climates have to say goodbye to.

Some whiskies are best after eight years, some after 16. Tasting is key in deciding when a whisky is ready to be blended and bottled.

The final stage in making whisky is getting it from cask to bottle. However, that’s not a direct route for many whiskies. Most whiskies, even ‘single malt’, go through a blending process, mixing it whisky from other barrels to create the perfect flavour profile before it is bottled.

Once the master blender reaches the desired taste and aroma, the whisky is bottled, at a minimum of 40% ABV.

And after all that, it’s now time for the fun part…drinking!

Check out our step-by-step guide to whisky tasting here.