While whisky might not be the first thing that springs to mind when we think of Australia or New Zealand, the countries are slowly but surely making their mark on the whisky industry.

Despite its ‘up and coming’ status, the presence of whisky ‘down under’ is actually far from new. With whisky-loving Scottish immigrants arriving in New Zealand and Australia from the 1830s onwards, the spirit soon found a new home for itself in major towns and cities. Unfortunately, government action and public reluctance to embrace domestic whisky meant the industry had all but disappeared by the early 1990s.

Fast forward 30 years however, and the story’s taken another turn. ‘New world’ whiskies have captured the attention of whisky enthusiasts, and multiple distilleries are making a name for themselves in the global arena.

Here are five whiskies from Australia and New Zealand that should be on your radar.

Nominated as one of the top four distilleries for Worldwide Whisky Producer of the Year (IWSC), Lark Distillery has been making whisky for over 30 years. Now one of Australia’s most famous distilleries, the Tasmania-based operation credits the success of its products to the climate they’re created in. With cool air, grey skies, lush countryside and an abundance of water and peat, Tasmania looks not unlike Scotland.

Using fresh water sphagnum peat from Lark’s own peat bog in the Tasmanian Highlands, this is then transported to the distillery and used every day to smoke their Australian sourced barley. Oak casks are individually selected from Australia’s finest fortified producers to age the single malt spirit, resulting in rich notes of citrus on butterscotch. 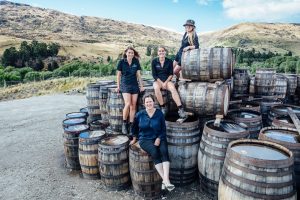 Family owned and operated, Cardrona Distillery has an all-female distilling team. Together, they create the distillery’s uniquely flavoured single malt whisky, ‘Growing Wings’. The spirit oozes flavours like pecan pie, treacle and vanilla bean clotted cream, making it equally delicious to drink on its own or in a rich, wintery cocktail.

Made in Melbourne, Starward whisky dubs itself “whisky for a curious, food-obsessed generation.” Located in the ‘foodie capital’ of Australia, Starward makes a point of ditching whisky snobbery, instead opting to zone in on flavour.

In order to achieve its signature fruity flavour, the distillery team uses red wine barrels to mature Starward whisky. All ingredients are sourced from a day’s drive away, and thanks to Melbourne’s tempestuous weather, the end product is ready to drink in just three short years. 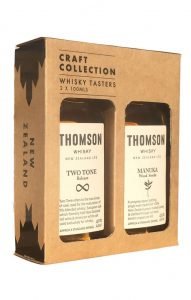 Located in the town of Riverhead, North West of Auckland, NZ, the team at Thomson Whisky use just a handful of ingredients to form the basis of their single malt. Add in a pinch of passion and a dollop of creativity, and the distillery has a range of award-winning whiskies.

Wondering about their process? Here’s how they put it, in their own words;

“We mash our grain with hot water and elbow grease, just as our forefathers did, and don’t use malt extract, sweeteners, colours or flavours. Once the wash has fermented out we distill it twice through our copper still.

“During the second distillation we take spirit from the ‘middle cut’ which is the heart of the run. It’s this middle cut that is aged in oak and becomes Thomson Whisky. We mature our whiskies in a range of casks including ex-bourbon barrels, NZ red wine casks and some miniatures. We sample these regularly, and bottle them as we see fit.”

The distillery’s award-winning product range speaks for itself, with whiskies spanning a range of depth and flavours – all of which sound nothing short of delicious. 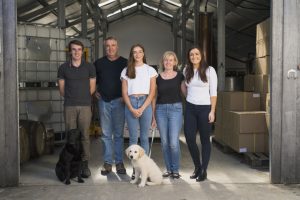 Proudly Australia’s southernmost whisky distillery – and the world’s southernmost family-run distillery – McHenry Distillery takes advantage of southeast Tasmania’s cool-moist maritime environment. It’s able to distill its whisky in just the right conditions to make the most of its time in the wooden barrels, and has a natural source of pure spring water which becomes the heart of the developing spirit.

McHenry produces two single malts – one cask strength – which both offer hints of vanilla, caramel and summer berries. On that note, we’re off to stock up.